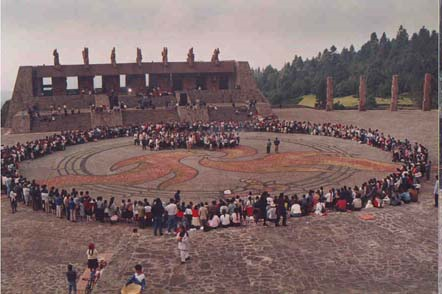 THE OTOMI TOLTEC PEOPLE (Hñähñu)
Past, present and future

This page I made hoping to answer those who ask me, Who is there ?, Otomi people leave my family roots.

The Däbädi, wise old Otomi and guardians of our history transmitted from generation to generation, they say that our origin dates back to such a distant past that is lost in the mists of time. We are the First Site, the oldest people of our continent, from Mexico and Mesoamerica; which flourished over 30,000 years ago.

Our ancestors discovered Mfuhthä or Teocintle; Tihta inventors or Medepa Temascal and has the time or calendar. They used forms of communication and energy that allowed him to develop a great civilization expressed in science, art, literature and philosophy very advanced, but unknown to date by historians and scholars in the field. Our people managed to keep their education and own worldview and its institutions and governance, organization and work-based Mföxte (collective and communal life).

We are heirs of the Lordship of Ndonguu “Place of the Old House” (Today Xikipilko El Viejo), where he was born and ruled the Grand Chief ‘Botzanga (Black Lizard), who commanded his army of eight thousand warriors, valiantly defended the territory and freedom of our people; Young Hero grappled with Axayacatl invincible and defeated him in the ‘Batha Nts’ojuai (known as the Plain of Navajas), on top of these mountains; leaving us an example of dignity.
We carry in our veins the Otomi force Tlahuicole, who preferred to die standing subjected to live in Tlaxcala, so tied five warriors had to fight to beat.

In these lands the Otomi people waged great battles to shake off slavery and colonial rule; so he joined the insurgent forces in the War of Independence, and more than 70 thousand Indians in their Otomi most of the region, the royalist army invader was defeated in the glorious Battle of Monte de las Cruces.

Faced with the denial of our rights, land grabbing and abuse on farms, our grandparents joined the Liberation Army of the South of our General Emiliano Zapata to claim “Land and Freedom” with the decision that a Zapatista headquarters settled among the Otomi mountains of Ocoyoacac. Thanks to the Otomi struggle were able to recover many lands invaded by landowners.

In the last five centuries, the Otomi people have lived in the dark, but has not given up to achieve change this submission and extrerminio. The Otomi Contemporary Motion has entered a new phase of organization to determine their own path, historical destiny, life.

With the Pact is achieved Matlatzinca Valle boost alliance Otomi Village with Mazahuas Brothers, Matlatzincas and Tlahuicas. Where a firm commitment to work together to achieve our historic demands of our communities is done. This Otomi Ceremonial Center is the result of that effort. In this process we are born to follow the path set and the Council of Otomi Culture and the Council of the Nationality Otomi, to promote our cultural identity and achieve reunion and reunification of all comunidade and regions of the former Nation Otomi arises. In this spirit the communities chosen for traditions and customs to their traditional authorities.

The present and the future urges us to work to build the unity of the Otomi people. Advance to recover our inalienable right to self-determination and internal autonomy, so that we Otomi, indigenous peoples who decide our own path and historical destiny. This will allow us to decide our political, administrative, territorial, educational, social and cultural life; within a new constitutional framework both locally and nationally, a vedadera equal relationship as Mexicans and inhabitants of the State of Mexico.
Otomíes Pluricultural aspire to a new state and a new Multicultural Society. By the force and strict compliance with international and national standards to protect the rights of Otomi People and Indigenous Peoples. For peace and justice in communities, municipalities, regions Otomi Territory, towards a new pact within our peoples.
We fight for present and future strengthening and full right of women, the elderly, elderly, youth, children and Otomi girls.
The real word is heard again: “While there is an Otomi in the mountains, in the mountains, on the plateau and in the valleys, there will shine hope, the light of our reunification”.
“If you are the Otomi heritage, think of your brothers in suffering humiliation, think of those who seek to shake exploitation”
“They cut our fruits, our branches ripped, burned our trunk, but failed to kill our roots.”
Recall the message our parents embodied in the Declaration of Temoaya, he says;
“Brothers Indians. The time has come for our voice, our word, to be heard Nobody will speak for us, nor will sit to discuss what to do with our people.
We are alive and we take our destiny in hand, after all it is our ancient land and our rights here shine. Because here the sun always shone in our history and will continue to shine for many centuries now. ”

(Mesaje of Thaayrohyadi, traditional guide and General Coordinator of the Council of the Nationality Otomi given in the Otomi Ceremonial Center, Temoaya, Mex., March 3, 1999)